Hullo, minions! I was poking through some old drafts yesterday and came upon an aged, dusty post dated exactly one year ago today. Why I never posted it is beyond me, but after reading through it (and subsequently laughing my face off), I decided it would be quite appropriate for today.

Enjoy the misery of One-Year-Ago Sarah.

Yesterday was supposed to be the first day of spring.

Keyword: supposed to be.

This is what I woke up to on Tuesday morning.

Disregard the fact that it was a balmy 55 degrees just the day before. On the first day of Spring, we had a foot of snow.

But while I was draped across the heater and whining about moving to Australia, Anna refused to be so easily dispirited. She was bouncing off the ceiling, chattering about sledding and the like, all the while chiding me for being so grouchy. And eventually, like any good older sister, she manipulated me into leaving my little cave of warmth/happy thoughts and forced me out into frozen wasteland otherwise known as “Pure Misery.”

Amidst much grumbling and complaining on my part, of course.

Look at her. No one deserves to be so happy about snow. 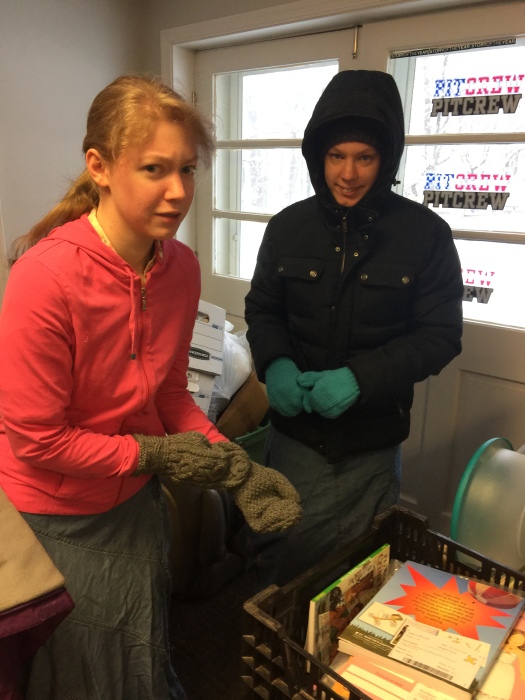 I politely informed her of such.

After we’d bedecked ourselves in winter garb and marched to our inevitable dooms outside, Anna (for some strange Anna-ish reason) decided we needed a picture of the spectacle. She wanted to record her insane happiness for future generations, and how incredibly miserable I was.

In my defense, it was cold.

After I’d made my negative position on the matter very clear, I was told to buck up and smile like a “normal, mature human being.”

Which was a death sentence for normal mature smiles.

This is what I call “The Grimace of Synthetic Cheer.”

In my defense, I was cold.

After this, Anna started prancing around and exclaiming about the glories of a good snowfall, to which I (more or less resentfully) pointed out that the Snowfallen Glories would have been better off coming within their designated time-slot on the calendar, instead of the first day of Spring. I then hunkered down into a happy little pillar of disgruntlement and proceeded to whine.

I call this one the “Forsaken Waif” look.

Unfortunately (and as Anna soon discovered), the Forsaken Waif made a very good target for throwing things at. 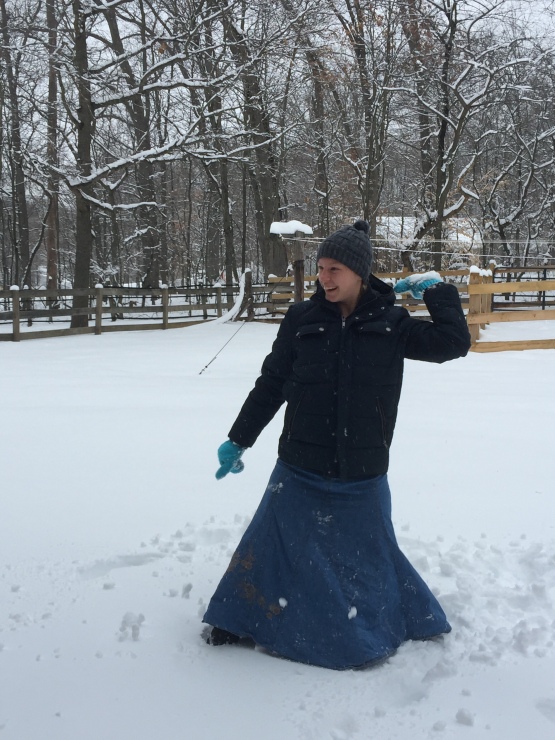 See? I’m not the only mean one in this family. 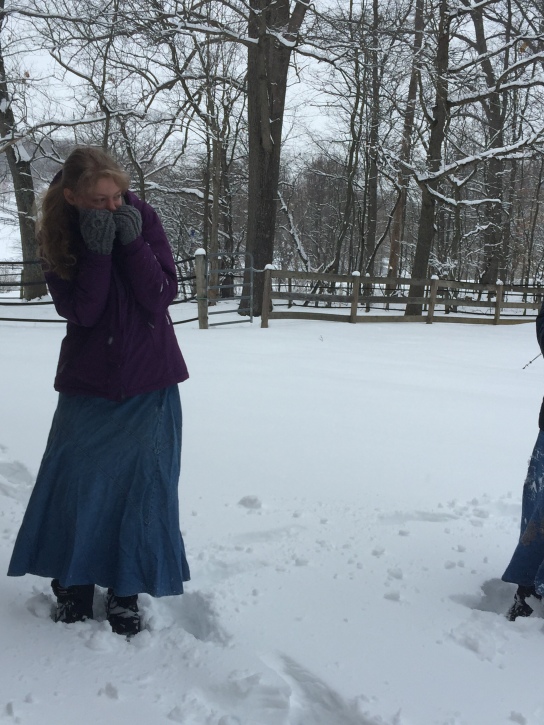 Just look at me. A victim of humanity’s utmost cruelty.

I have no clue what I was saying here, but I’m pretty sure your imagination can fill in the blanks. 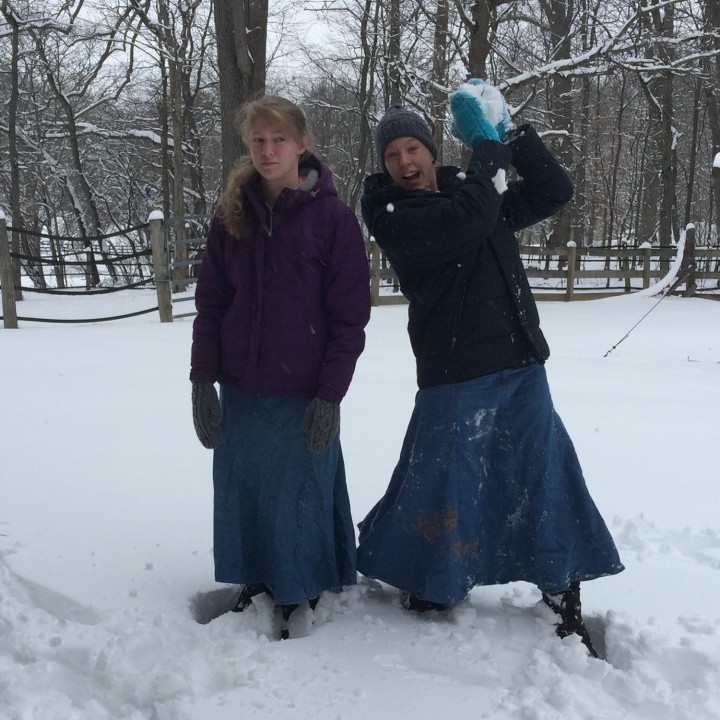 After this, Anna miscalculated her aim and ended up launching a snowball at our photographer, who disappeared quicker than Emotional Stability in the wake of Kylo Ren. I wasn’t terribly disappointed. The camera woman (none other than my mother) was simultaneously making fun of my misery as she recorded it.

I’m not the only mean one in the family.

Once Anna had thoroughly exhausted her supply of snowballs and I had ceased to be an amusing target, we found some sleds and trekked off to the top of the hill. That was even worse. Anna hadn’t been able to find any snow-pants for us, but she’d told me (and I quote), “It’ll be fine.”

It was not fine.

Leggings are not waterproof.

Wading up a hill in a foot of snow is difficult enough in its own right, but when your clothing gets soaked through and you have an inch of icy fabric rubbing against your skin…

“Don’t be a wimp, Sarah,” Anna had the nerve to tell me. “My skirt is soaked through too, and I’m fine.”

“Well we can’t ALL have the endurance of an Atlantic squirrel,” I pointed out, though she wasn’t listening.

Once we got to the top of the hill, Anna said that the snow had to be packed down into a slick trail before the sleds would go down it. I was like, “Pfffffft, no it doesn’t. All you need is a running start.” I slapped my sled down, backed up a couple of feet, and bounded toward it with the speed and grace of a lumbering penguin.

Let’s be clear about one thing:

Snow needs to be packed down into a slick trail before you can sled on it.

After face planting and nearly losing my glove, I settled down to whine as Anna settled down to a task for which I was zero help. (In my defense, the cold had seeped into my ears — for some idiotic reason, I wasn’t wearing a hat — and was giving me a splitting headache.) I finally summoned the courage to beg a respite from the outdoors, fully expecting to be crucified by the queen of it all.

In a stunning turn of events, she actually let me go.

Before you start judging me for my weakling tendencies, let me just mention that when I was finally inside again, my knees were so frozen that they had swollen up and I could barely bend them. And I had a splitting headache. In my mind, that constituted a worthy excuse to not go back out when Anna finished the sled trail, and to lay around the house for the rest of the day, whimpering pathetically as indulgent parents tolerated me.

And this, folks, is why my siblings never bother asking me to go outside with them. Not all of us were made to be Laura Ingles Wilder.

For the record, Anna made fun of me when she finally came back inside.

I’m clearly not the only mean one in the family.

Happy Spring, folks, and may the snow stop falling, the sun start shining, and no one get hit by a falling icicle.