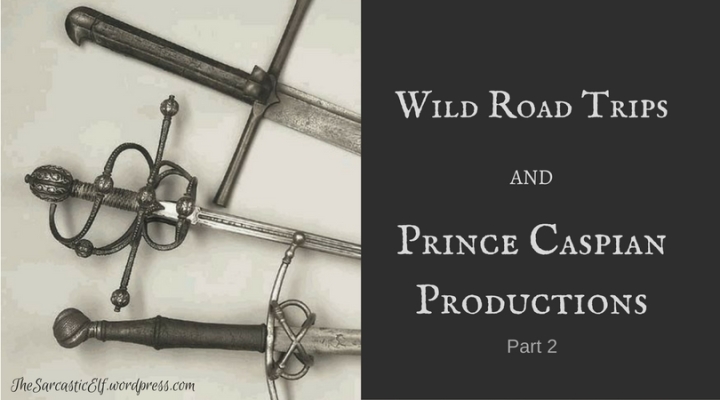 Welcome to part 2 of our road trip. May the odds be ever in your favor.

Okay. I said in my last post that we were in Greenville to see a play of Prince Caspian, and that was where my specificity ended. So, I’ll elaborate. This is not just any cheesy high-school play.

This is the Academy of Arts.

And for a small Christian arts school, their productions are shockingly high quality.

Now, I don’t just mean acting. Yes, their acting is very good, but they also have amazing music, amazing lighting, amazing props, sets, costumes, makeup, effects. In fact, Doug Gresham, C.S. Lewis’s stepson, actually flew all the way from England to watch it, AND he loved it.

They’re good. Have a trailer.

At about 1:58 of this video, Legolas gets a cameo in the upper left corner.

Last year, they did The Lion, the Witch, and the Wardrobe, and Anna and I had the privilege of seeing it with my aunt when they brought it on tour to Virginia. When we heard they were making Prince Caspian, we managed to drag our family into going on a trip down to Greenville last January to see it. It was so good that we decided to go again, now in June. This leads up to where we are now.

I honestly think I was more excited the second time seeing this play, because unlike the first time back in January, I knew just how good it was. It takes a lot to flap me, but in the car on the way to Logos Theater (AoA’s Theater. Duh), I almost threw up. (Not that anyone knew this. If they had, Anna probably would have thrown me out the window.)

GUYS. There it is! It will live on with me forever in the form of an extremely bad picture. Note how the poster up there says “World Premiere”. That’s right, people, this is the first professional production of this book to EVER hit the stage.

To the woman whom I inadvertently photographed the hair of, my deepest apologies.

Oh, and did I mention we had front row seats? Well, we did. They were lovely.

A strikingly awful picture of my father holding popcorn he and I bought at the expense of our dignity. We’d headed off in search of the stuff, only to end up in a forgotten corridor in the exact opposite direction of where we were supposed to be. This is what happens when you trust Dad’s directional skills.

Then, the lights dimmed. The crowds quieted. A small screen rolled down in front, and this guy’s face popped up. “Hello,” he said in a wonderfully British accent, “I’m Douglas Gresham, and welcome to the Logos Theater.”

It was so moving that I began to cry.

Maybe that was a little…stupid…of me. But I had been looking forward to this for so long, and I knew how beautiful it was going to be, and we had front row seats, and…and…

Not gonna lie, Prince Caspian has always been my least favorite book of the Chronicles of Narnia. But somehow, the Academy of Arts managed to take a long and somewhat boring story and turn it into magic. Pure, simple magic that makes you laugh and cry and get the chills.

There is no good way to explain how amazing this play is. It’s one of those things that you’ve got to see before you can truly understand. In pictures and videos, it looks quaint, cool even, but not able to stir your emotions. Not joy and sorrow and faith and love, wrapped into one wonderfully convicting performance. Not a production that is powerful in every sense of the word, and in every sense of Christianity and the message it presents.

And then…it was over. The curtain went down. The Pevensies and Caspian took a final bow. Aslan roared one last ear shattering roar. The audience hurt their hands clapping.

And it was over.

Here I am, looking slightly dazed. I didn’t know what to do with my face. Or my hand, apparently.

Then we went to get pizza, because we figured that on vacation, you might as well abandon any endeavor at healthy eating. Dad, in his attempt to find Pizza Hut, turned into five parking lots before finally finding the right one, despite the fact that he had a GPS and Mop the Backseat Driver. Apparently, his skill for finding popcorn extends to all facets of eating.

And that concluded Day 2 of our trip, though I still haven’t gotten over it yet. How do you pick up the threads of a broken life? How do you go on, when in your heart, you begin to understand there is no going back? There are some things that time cannot mend. Some epicness has gone too deep, and has taken hold.

PS. Have another trailer. For the music, if nothing else. Or the costumes.