*stumbles in and promptly collapses into a pile of fidgeting limbs*

And in the process, ended up disappearing from life.

I truly believed the end of November would find me bowing and scraping to the masses, apologizing for only completing about 5,000 words. Instead, you find me beaming and proudly flaunting my 50,000.

Yes, you heard correctly. Aeterna has an extra 50k words tucked between its pages, boosting the overall wordcount to 117,000. In honor of this monstrous achievement, I’ve decided to share a few snippets with my faithful blog following — a special sneak peek of what’s been happening in my brain during the last month.

To start off, we have a lovely little example of Liriel and Lotch’s dysfunctional alliance. Have a collage.

Liriel rubbed the back of her hand across her sticky face and smeared the dust away from her eyes. Dirt clung to her skin like a parasite, ever-growing in the tarnished, sultry wind. Sweltering and exhausted, she grit her teeth and focused on the cracked road beneath her feet.

Lotch, however, bounced along beside her, completely oblivious to the oppressive world they lived in.

“Tapitha thought I was crazy for going off with you,” she chattered happily. “She thought you was gonna eat me! Ain’t that a hoot? ‘Course, Cook weren’t happy about it, ‘cause Cook wanted to eat me herself. I think I must taste real good, since so many folks want to eat me. Have you ever eaten a person? Though actually—” she rubbed her nose on the back of her sleeve— “Tapitha says that sprites don’t eat nothing but ice cream all day long. Do you eat ice cream? I ain’t never had it before, though Tapitha says—”

“If you don’t shut up, I’m going to stick an arrow through that useless tongue of yours.”

“Ha, that ain’t what she said! Tapitha don’t know nearly so many words as that.”

“Because she didn’t say it. I did. Cease this mindless prattle.”

Lotch’s chattering abated. Sighing, Liriel pressed her palms against her eyes. The silence was an ointment in her ears, thick and soft and soothing. If only–

“Can you walk upside-down on the ceiling?”

Yaaay, wooo. *waves hands like a psycho* Now a conversation between Emolas and Liriel, in which Emolas is a cryptic little bean and Liriel gets annoyed™.

“Do you think me strange?” she asked, when the silence had taken a shape again.

Emolas tipped his head back and smiled at the stars. “What do you mean?”

“Alright, then. If it makes you feel better, I do find you strange.” He glanced over his shoulder, and Liriel realized with a twinge of annoyance that he was making absolutely no effort to hide the amusement radiating from his cheerful face. “To be perfectly honest—”

“Mercy forbid you be anything but,” she muttered.

“—you’ve always been a little strange, though you would never have understood if I’d tried pointing it out before. You make me think of a dog that raises the fur on its back.”

Liriel kicked a rock over the side of the cliff. “Thank you for that brilliant analogy. Nothing quite boosts my self-confidence like being compared to a dog.”

“Liriel, I wasn’t finished yet.” Though laughter welled like honey in the golden pools of his eyes, he maintained the steady edge of graveness tinging his words. “Do you know why a dog raises its hackles?”

She sighed. “Back to that one, eh? I assume you want me to ask what it’s afraid of?”

“You don’t have to, but it might help the conversation if you did.”

“Alright then. What is the dog afraid of?”

“Being found out. It makes itself seem so intimidating and unapproachable that the other dogs won’t attempt to challenge it. It’s a strange sort of safety, you know: Pretend you’re good enough, and no one will try to change your mind.”

Another rock met its demise over the edge of the precipice. “I suppose that’s somehow supposed to make sense?”

“Liriel,” Emolas said patiently, “I can’t talk to you if you don’t want to listen.”

She bit her lip, squeezing until she tasted blood. She did want to listen to him. But she also knew what he would say, if given the chance. And here were there was no safety in distractions, she would rather talk about Glenborn, about autumn, about the busy trading season and the scurry to prepare for winter.

“Forgive me.” Her arms had wound themselves around her stomach again, hugging tight like armor. “But it’s been so long, Emolas. And suddenly…” Snorting softly, she shook her head. “Suddenly I’m afraid I might understand you more than I ever did before.”

“Is that such a bad thing?”

He gave a rueful laugh. “Well, if it makes you feel better, I really had nothing to do with your corruption. I wasn’t even here until a few days ago.”

“Believe me, that makes little difference. One minute in your presence is enough to corrupt the staunchest intellect.”

“Pity,” he said, and tipped his head back, face upturned to the heavens. In the darkness, the stars were a reflection of his soul. “This poor, foolish world could use a few ambitious intellects brave enough to be found out.”

And as usual, Liriel didn’t understand him.

Thank you, Emolas, for that sweet and inspirational saying that means absolutely nothing.

Folks, it’s time to welcome my Fantasy Cowboy to the stage. Here is — you guessed it — another collage! 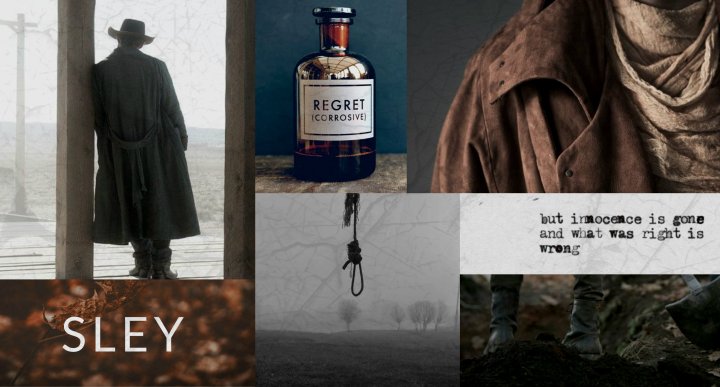 Sley looked into the faces of the moons and saw his wife’s eyes staring back at him, cold resolve in the shadows of her mind and angry heartbreak pooling in the damaged storeroom of her heart. He looked down at the dirt under his boots, and he saw his own broken pieces, scattered like dust to the wind’s whims.

He looked up again. Beyond the moons, beyond the stars, beyond the sky, and for a brief moment, thought he saw the face of God — an angry, angry God, with no warmth in His eyes and no love in His heart.

Sley looked down again. Not at his hands, clenched into fists on his knees. Not at the sword lying next to him or the steep walls of crimson rock that rose on either side, hemming in his body as pain hemmed his heart.

Sley looked at the camp spread out before him. At the cook-fires dotting the cliffs and caves, at the makeshift tents crudely set up and the bedrolls laying in the dust. He saw people; dark men wearing wolves’ hides over a layer of dirt, men who bickered as they ate their stew and cursed each other as they lay down to rest. Men who slept with swords by their sides and daggers up their sleeves, wary of an ambush from without and terrified of one from within. Men who spoke a guttural language and followed the harsh laws of the mountains, men who worshiped demons and made their livings by taking souls.

“Well, Sovereign,” he muttered, glaring at the sky one last time, “behold your wondrous creations.”

Aw, isn’t he a cutie? My sweet, murderous little psychopath. *ruffles his hair*

So, guys, at long last you have those snippets you’ve been clamoring for. What did you think? Was it worth the wait?

To my Sisters and Brothers in the epic NaNo Battle — well done, faithful soldiers. We are officially cool. And currently brain-dead. And possibly a little sick of our books at the moment.

Excuse me while I go into hibernation for the next two months.