The sun is bright, the wind is cold, and the strange Sarah creature has entered into Week #2 of NaNoWriMo. Surprisingly, all of her primary psychological functions are still mostly intact.

Aeterna hit 80,000 words a couple days ago, and that in itself is enough to blow all my psychological functions to pieces. I remember with fond nostalgia the days when the entire book was a mere thirty pages. At the time, I thought I’d written a tome.

I’m only a chapter past the midpoint and it’s already this big.

Anyway, in honor of having written more than 10k this week and reaching 80k altogether, I’ve decided that the Aeterna art dump is way overdue. I’ve been teasing its release since what, August? That’s a long time to keep you people waiting.

A truly ironic skill for such a reclusive introvert.

For those of you who aren’t familiar with my book (probably most of you), you can head over to the page dedicated to Aeterna coolness and read the synopsis.

Like, seriously, go do it. It’s a good synopsis.

It seems only proper to start out with the girl herself. Guys, this is Liriel, my most prestigious main character. She belongs to an immortal race of creatures known as the Aeterna, who are forest dwellers by nature and cautious recluses by habit. Liriel is the kind of person who would be dubbed a tattle-tale by little kids and boring by big ones. I, however, choose to think of her as “austere.”

She may or may not have inherited some massive emotional deadness from her author.

Zhis is my widdle Lotch bean. A bedraggled human guttersnipe and firefly enthusiast. Liriel finds her…

CONCEPT ART! I love this kind of stuff. Now on to a random and brief culture lesson, lest I be deemed a heathen:

An Aeterna’s ears are more sensitive to pain than any other part of their body, and because of this, piercings have become a large part of their culture. They’re excruciating to obtain — it takes almost five years for the last remnant of pain to subside — and were originally regarded as a ceremonial symbol of strength only fit for warriors. Apart from basic prestige, certain types of earrings are worn to show rank, such as the king’s. Instead of a crown, he has that wingy looking contraption as pictured above. I thought it would be fun to break away from the typical conception of jewelry in fantasy and try something a little more bizarre, and this was the result.

Of course, the tradition, which was originally born out of honor, has gradually spiraled into silliness and peer-pressure, most commonly among the Aeterna youth. (The more earrings an Aeterna has, the more brave and resilient he appears to be, etc.) And we must take a moment to acknowledge the few brave souls who refuse to wear any at all, namely–

Emolas is a dandelion in the barren wasteland of my book. The drop of sunlight in a dark world. The golden boy. The lonely soul. The tragic optimist. The shunner of society. The societally shunned.

I could go on like this, but I think we’ve already established that he’s my favorite.

Ehehehehe, yes, this is Sley. Also human. Also troublesome. A bit mentally unstable. The words “deranged”, “miserable”, and “murderous” come to mind, but in my defense, he is a mercenary. Would you expect anything less from a mercenary? 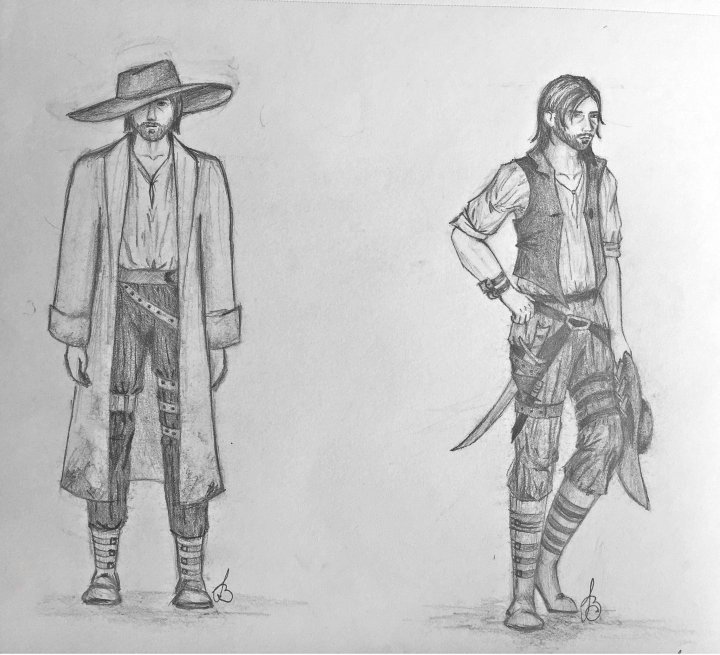 I’ve always been fascinated by the idea of blending Wild West culture into a Fantasy world, and Sley bore the brunt of that crazy idea — becoming a strange blend of cowboy, Spaniard, and Prince Caspian, all wrapped into one melodramatic mercenary mind.

The fact that this mish-mash of stereotypes somehow works is still the greatest mystery of my writing career.

Here we witness Liriel being mildly annoyed with her cousin, who can be mildly annoying. Guys, meet Aven. A relatively new addition to my cast, and a strong supporter of everything, as long as it isn’t boring. Liriel calls him an obnoxious chirp.

(To be fair, he called her an intolerable gloom, so who’s really at fault here?)

(The answer is Liriel. Liriel is always at fault for everything always.)

And here is the official Aven concept designs. The Aeterna are pretty scrappy — the kind of people who are rarely encounter threats, but always ready for them when they come — and as such, I always pictured a somewhat paradoxical appearance; you have these little round-faced munchkins with colorful hair and cute ears, who also happen to be bristling with enough weapons that Fili himself would be proud. And because Aven is a captain, I gave myself free license to go as overboard into the Epic™ department as I wanted to.

In my defense, he totally deserves it. I love this dude.

“I would like to be thought of as average,” he said, but even though he smiled, there was tragedy in his eyes — the sad reluctance of knowing that ‘average’ was the one misfortune he was never meant to suffer.

Here is a younger version of Emolas, in much need of a haircut.

Foresty, woodsy folk that they are, I thought it would be nice to have some sort of something with them in their natural habitat. Halfway through the painting, I got bored and decided to make it autumn instead of summer.

This resulted in a troposphere that was SUPPOSED to be leaves but ended up looking more like blood splatters.

Some Emolas concept art, featuring my incoherent scribbles and obvious remarks, such as– “Carries sword on back.”

Like, no, actually, the thing that looks suspiciously like a sword hilt is actually an oversized popsicle stick he lugs around for no reason.

Emolas, being very much the philosophic loner, didn’t warrant over-the-top gear like Aven’s. In fact, I always imagined this character wearing what would be considered “last year’s fashion”. He’s practical, he’s passionate, and as for everything else — well, he doesn’t give a rip.

And finally, a lovely sketch of Liriel looking mildly happy and Emolas looking majorly oblivious. Originally, I planned a whole series of these. They would be called, “Bonds: A Sequence of Relationships.” In THEORY, they would showcase Liriel’s various and sundry relationships with the various and sundry members of my cast, and be a nice study on her range of facial expressions. (Basically, annoyed and mad, because those are the only emotions she’s prone to.)

I got as far as Aven and Emolas and that was the end of it.

Now, before I wrap this up, I thought it would be fitting to share some of my old concept art — the stuff I drew a couple years ago, back during Draft #1 when I was still naive enough to think this book would only be 30 pages long.

A brief warning is necessary before we continue: Folks, be forewarned that the image you are about to view will probably blow your mind and turn your thought process to little pieces of char. It’s that good. Possibly the best thing I’ve ever drawn in my young life.

Ladies and Gentlemen, allow me to present… 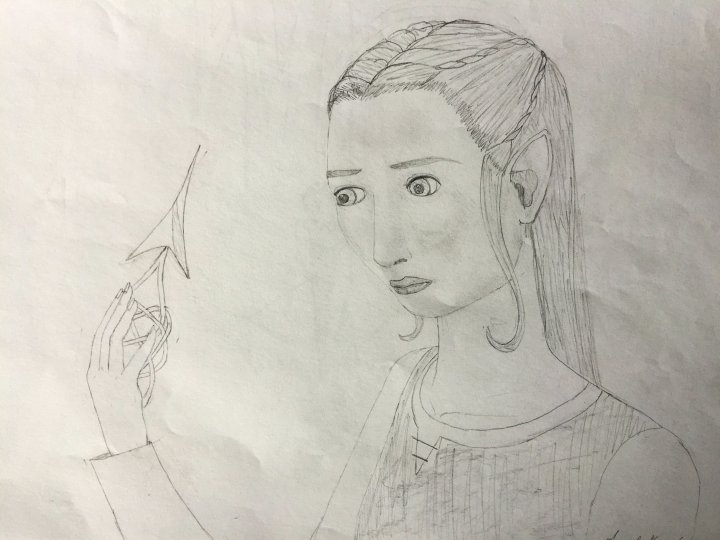 *stares nostalgically into the sunset* Ah yes, back in the days when Liriel was a mere Elf ripoff, her hair wasn’t silver, and her personality nonexistent. It’s hard to believe my character was EVER as horrible as that First Draft nightmare. It’s even harder to believe that there was a time when I lauded the above drawing as the best thing I’d ever accomplished in my entire artistic career.

I like to think I’ve gotten just a tiny better.

So anyway, there you have it, folks. Art, rambling, a bit of history — all the fun stuff. What do you think? Which drawing was your favorite? Would you be interested in more of this stuff sometime in the future?

If humans breathed carbon dioxide and omitted oxygen, would we be called plants?

Talk to me, people.

43 thoughts on “Of Characters and Concept Designs: The Artistic World of Aeterna”