The other day, I decided to flip through an old sketch book of mine, one from aaaaaall the way back when I first got serious about drawing, dated 2014.

The result was me dragging forth all my finished sketchbooks and lining them up on the floor to compare style and improvement. The difference between the sketchbooks from five years ago and the current ones is so extreme that sometimes I laughed and sometimes I cringed (extremely hard) and sometimes… well…

May I present “An Evolution in Art,” or something like that. BEHOLD:

Way back in 2014, I decided to become a professional artist and THIS unsightly glory of 13-year-old craftsmanship is the result. But hey, we all have to start somewhere, right? This is a memento of just how far I’ve come. Even though I sometimes feel like throwing these old sketches into the compost pile, I’m still glad to have them because–

Scratch that. I’m burning them all.

See that little pinnacle of land to the right? That wasn’t in the original version of this drawing. But when I showed it to everyone, my cousin pointed out that she was shooting an arrow into the ocean — and unless she thought she could catch fish that way, it didn’t make much sense. (Thanks, Zach. I may have acted like I wanted to throw you out of my house at the time, but when all was said and done, the extra strip of land now exists.)

Literally every single person I drew in 2014 was wearing something from the Narnia movies. (#SorryNotSorry) My question is, what are all the dark squiggles in the corners? Was I trying to represent mental illness with these simple contour lines of chaos? Or did I actually think they were the way to draw darkness??

Enter in the 2015 era: Liriel was born, Lord of the Rings was watched, and I did my darnedest to merge the two.

(For reference, here’s the compilation of current Aeterna art.)

Do you realize what this is? Probably not, so I’ll tell you: This flat, guppy-mouthed, ill-shaded faux White Witch was my very first attempt at drawing a portrait.

All things considered, I think she looks quite good. Especially that one ear. 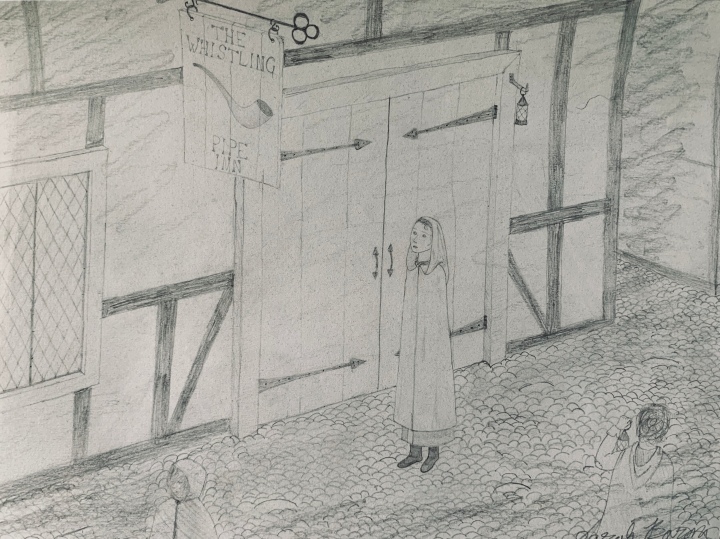 Ah yes, back to Liriel. And LotR. I was still trying to make them be the same thing. 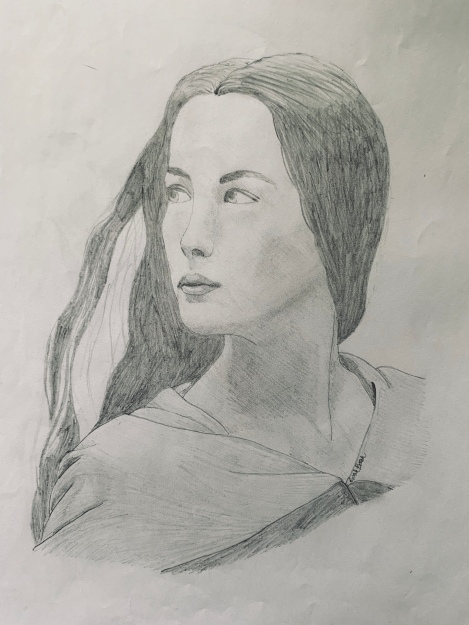 My second portrait. Done exclusively with an HB pencil. This is the reason my art teacher still has nightmares.

The interesting thing about these old drawings is how detailed my backgrounds usually are. Nowadays, I forego the background and focus all my attention on the character, because I’m allegedly a “people artist, not a background artist.” But back then, I didn’t care what kind of artist I was. I drew because it was fun, and if the background looked as sloppy as the character, well, too bad. I was gonna do it anyway.

Yep, 14-year-old Sarah had more sense than the current version.

Rapunzel is secretly a gecko in disguise. You cannot convince me otherwise.

Child. CHILD. What is wrong with your hair?! It’s like someone glued dog-hair to a bowl and stuck it on your head.

First costume I ever made up on my own, without copying something from Narnia or LotR. Anna still talks about this girl.

What, you ask, are a fawn, a human, and a dwarf doing in a meadow where some strange rainbowy thing shoots up from a hole in the ground?

The answer, my friends, is I haven’t a cotton-pickin’ clue. 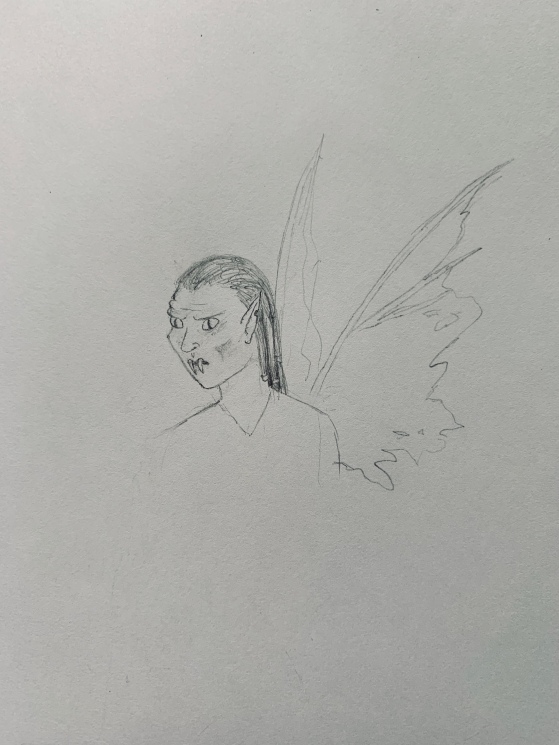 I have so many questions…

THIS — this lovely little Liriel, this sketch I couldn’t even be bothered to give sleeves, this original piece of concept art — this, friends, is the infamous drawing I showed to my mother and said, “Mom, I’ve reached my peak. Some artists attain sheer brilliance at a young age, and this is mine. Nothing I draw from this point on will ever be as good as these few lines of physical, emotional, and poetic genius.”

My first sketch of Emolas. I’ll… just… leave this one here.

Hello, 2016. Once again, where are her sleeves?! More importantly, WHAT IS LOTCH DOING??

(Also, notice how detailed both their poses are. I was starting to branch out into more complicated positions and the art of foreshortening.)

A continuation in the “Things I Should Have Finished But Didn’t” series.

Things I Should’ve Given Context To But Didn’t.

Here comes the 2017 era. I began experimenting with shading. And finally discovered other pencil values besides HB, and that they might actually be useful. I also learned a basic truth that sticks with me to this day:

This is also the time I started posting art to my blog. *squirms*

*coos* Awwww, look at the weird, scrawny little immortal snake-child. This was my first time drawing book fanart (N.D. Wilson’s Ashtown Burials), and I gotta say — I haven’t stopped since.

The costumes I created were starting to get more detailed, but I had a nasty habit of making arms look like glorified garden hoses…

Things I Should Have Finished but Didn’t: The ongoing saga with Liriel and co.

FYI, this is a completely accurate visual representation of what these three characters spend 95% of the book doing.

If you zip up to the first sketch of Liriel, you’ll notice the massive difference, not only in quality, but in concept as well. Out of all my characters, her concept has changed the most. At this point, I was finally starting to develop my own style, and you can see it in this picture. 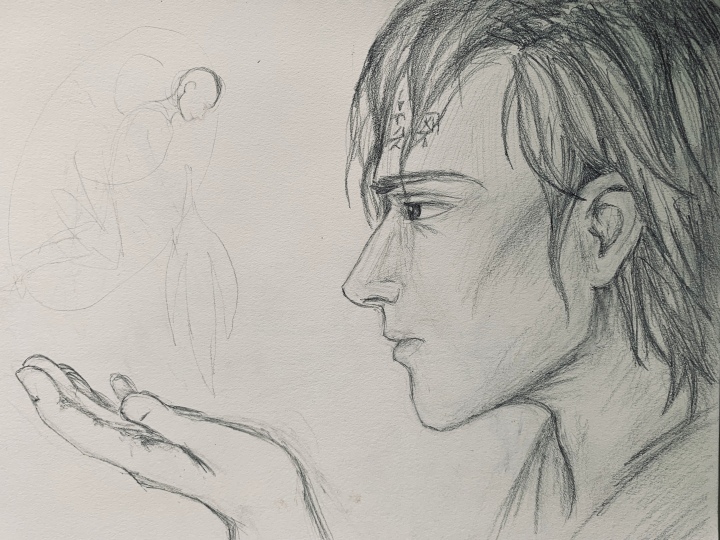 Things I Should Have Finished but Didn’t: 2018 Edition.

This is when I started drawing bigger, portrait-style faces from my own head, without a picture to reference or copy. Not to sound weird, but this guy’s nose is superb. 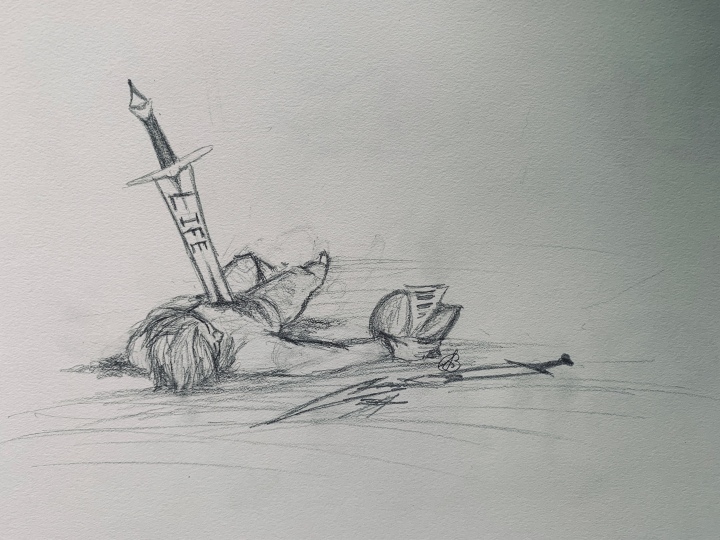 Yeah, um, so… You can tell what mood I was in when I drew this…

WHY DIDN’T I FINISH THIS?? All he needs is a bit of leg armor and the entire drawing would be perfect and wonderful and complete. *glares at myself* 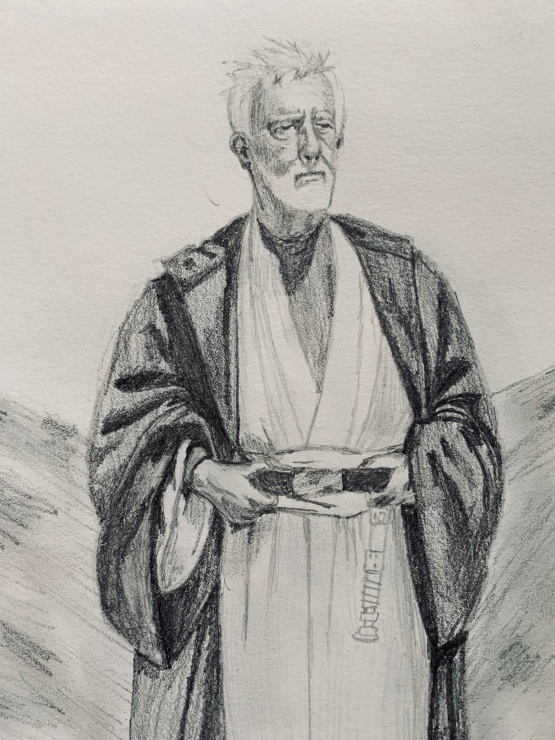 Finally, finally, the portraits are respectable! I AM INVINCIBLE!! I CAN DO NO WRONG!!! I AM– 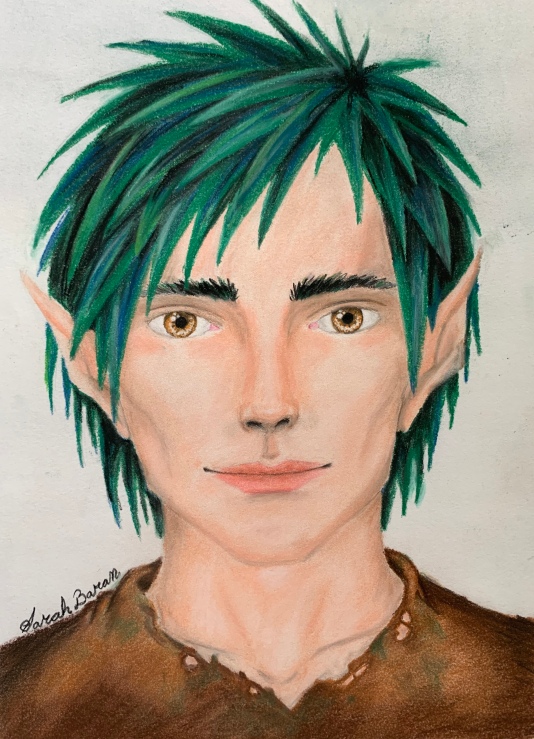 Yes, I was still trying (without success) to draw Emolas. If you think this one is bad, have a look at these: 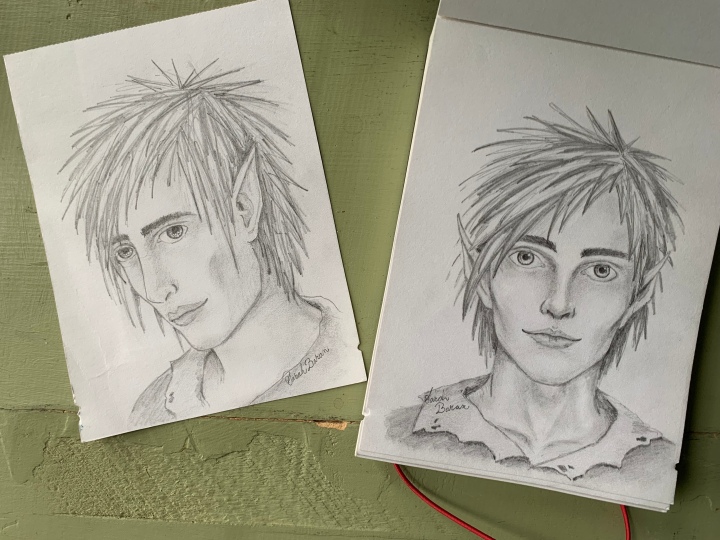 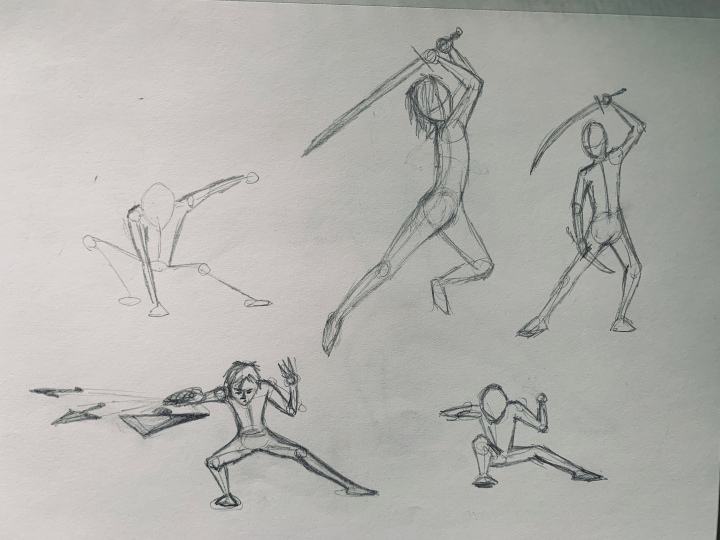 ….and, yeah, scratch that. Body proportions are irrelevant when it comes to demon troll thingies.

The reason I never finished this guy?

Costume design is hard, man. And I was too lazy to be bothered by the fact that he’ll be sitting here for eternity in his long-johns.

Back when I was reading the Lunar Chronicles, I thought it would be fun to draw the entire cast together.

I got as far as these two (Cinder and Cress) before finally realizing I would be drawing nine people all on the same page. 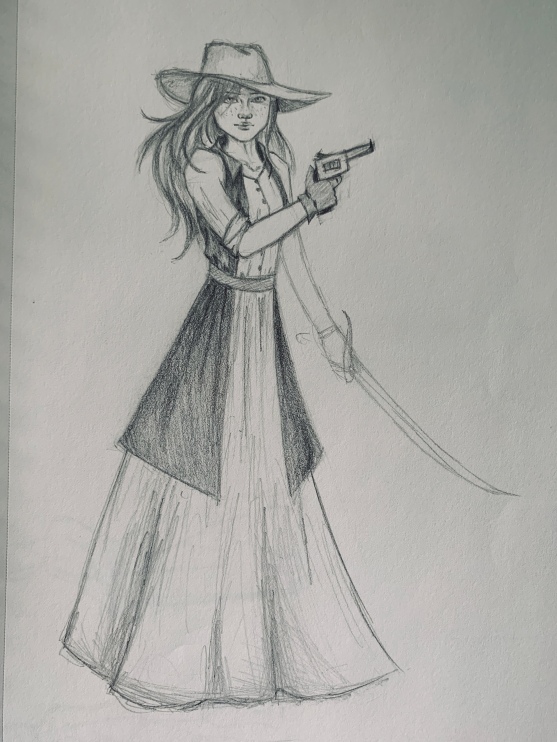 The reason I never finished this sword-wielding cowboy princess? Apparently, I was too lazy to draw THAT ONE LAST ARM, GOOD GRIEF. *facepalm* 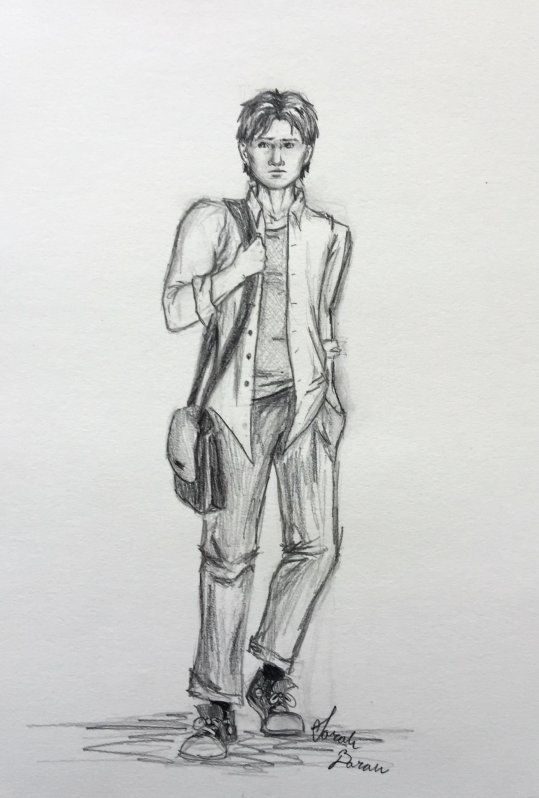 Whoa. WHOA. Note the difference between this and the first one, folks. I have a personal art-style going on here. The clothes are much better. Taking full advantage of proportions and poses to give some life to the drawing. Shading is a thing. The hands are…

The hands just are.

I learned that if you keep them mostly covered, no one has to know you can’t draw ’em.

Five years after becoming serious about my art, several classes, a few brain-cells, and an unhealthy amount of YouTube videos later, we come to this most recent specimen of my creativity. The one I claim has “surpassed all prior magnificence, and no other drawing will ever live up to,” and the one that I’ll probably want to burn in another few years, same as that sketch of Liriel.

But you know what? As cringey as some of these original drawings are, I found myself cooing in pride over them. Not because they were good (oh help, no), but because they represent a journey. I remember drawing almost every single one. I remember the things I was learning at the time, and I can see my efforts (however poor) to put those techniques into practice.

So artists, aspiring-artists, and everyone in between: Let my goggly-eyed, squishy-nosed, mutant-handed creatures inspire you. Keep plugging away at what you do, and maybe in a year — or two, or three, or ten — you’ll be the next Leonardo DaVinci.

(Speaking of whom, does anyone else find it slightly humorous that most of this post is me explaining why I was too lazy to finish my drawings? No? *cough* I’ll be… going now…)