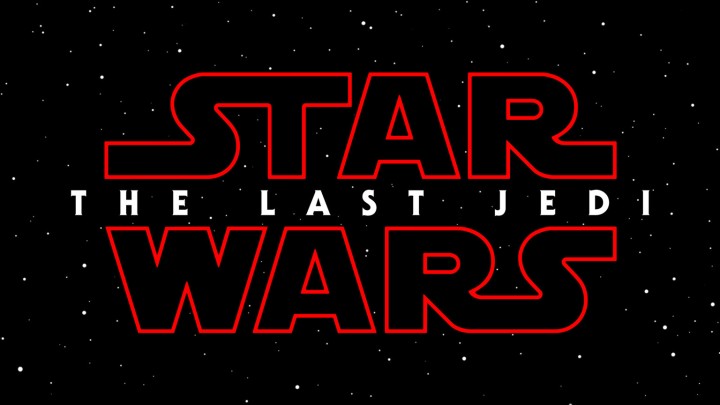 Guys, do you realize what this is? This is a momentous occasion. You are reading the last blog post I’ll ever publish in 2017.

SO. I got to see Star Wars: The Last Jedi ON OPENING NIGHT, Y’ALL, and it’s taken me this long to sum up the incoherent flailings of my soul into a discernible review. GUYS. This film is… epic.

To put it simply, I was reduced to a sniveling heap of fangirl feelz, something a movie hasn’t done since I watched the Battle of Helmsdeep for the first time three years ago. From the gorgeous cinematography (don’t call me a nerd—I’m very particular about the aesthetic value of stuff, okay?) to the layers upon layers of new character depth and duplicity, to the unexpected but surprisingly genuine relationships, everything about this film was simply stunning. (And more than a little startling.) Obviously, it wasn’t perfect—there were a few characters I didn’t quite connect with, and some scenes weren’t really necessary in the grand scheme of things—but on the whole, the imperfections paled in comparison to basically everything else. Anna and I were gasping like drowned wookiees the entire drive home.

And that’s why it came as such a shock to learn that a massive portion of the Star Wars fanbase hates it.

I have only one thing to say to you people:

The biggest complaints I hear about The Last Jedi is that it’s “too different” or “not very Star Warsy”. Which, frankly, I don’t get. Luke Skywalker is as much a drama queen as he ever was.

BUT upon closer inspection, I realized that yeah, people do have a point; in a way, it is different.

But not in the way you expect.

Director Rian Johnson takes an unexpected approach to unexpectedness. He doesn’t change any key elements of Star Wars; only your perception of them. Head Honcho/Palpatine rip-off Supreme Leader Snoke is still around, but our mental-image of him is forever skewed when we realize that the “Emperor Figure” isn’t quite as imperial as we thought, being defeated by Kylo Ren in one single act of Force trickery. His purpose was to distract us; in the long run, he’s not important at all.

Idealistic orphan sand child is still searching for her parents, but contrary to popular theory, she’s not a Skywalker or a Kenobi or a Solo. She’s not even daughter of the Big Bad Sith Lord—or even better, a mysterious creation of the Force. She’s a nobody. A nobody from a nowhere planet. All the hype around her lineage was a distraction as well.

And Luke—dear little whiny Luke, who never did get to pick up those spare power-convertors from Tosche Station—Luke is still around. But he’s changed. Yes, he’s as angsty and over-dramatic as he ever was, but gone is the bright-eyed kid who blew up the Death Star and had the most intriguing facial contortions I’ve ever seen.

Instead, we find the broken shell of a man so burdened with guilt and grief that he went into exile and self-imposed punishment for ten years.

The Jedi are still around, but now we’re told they must end. The dialogue is just as funny as ever, but it’s a completely different kind of humor from the wry looks and quippy one-liners of the previous films. And the psychopathic masked villain with anger management problems and extreme whining issues—he’s so much more than just another flat villain.

Like I said: Johnson doesn’t change Star Wars. Only how you perceive it. In a film where point of view is everything (Kylo’s perception of Luke’s attempt on his life made him wipe out the Jedi, not to mention that Poe’s perception of Holdo nearly destroyed the Resistance), it seems strange that Johnson would sabotage the very image of his own film.

But I know why he did it.

He knew it was the only way we’d let the old Star Wars go.

In the words of Kylo Ren…

Destroy the Past. Kill it, if you have to. That’s the only way to become who you are meant to be.

Now it’s time for me to interrupt this broadcast with a random real-life-story so that I can draw pathetic allegorical parallels. Buckle up.

Three years ago, I took my first art class. It was great. I met cool people, got free paintbrushes, and even learned a few things. Naturally, I wanted to take it again the next year, and it was even better. My classmates were as odd as me, we were learning stuff I didn’t even known was possible, and overall, it was grand.

Then came this year.

I went into the first class of the semester, bright-eyed and optimistic, expecting glorious things from the year. I came out an hour and a half later, looking like I’d just lived through the Hunger Games and wasn’t currently in possession of all my limbs and mental faculties. The class was horrible, my expectations crushed, and I knew I was doomed to an entire semester of drudgery. It’s disappointing—especially when I remember how great the last two years were—but in a way, it’s also a blessing. Next year, I probably won’t be in the position to take the class again. And because it changed—because it’s so different from what I’m used to—I’m ready to give it up and move on to new things.

*and the shocked masses blink, slightly confused about the relevance of this*

People want Star Wars to be exactly the way it’s always been. And that’s just not possible. Don’t get me wrong, I think nostalgia is great—there’s nothing like seeing that familiar clunky technology in The Force Awakens, or Bail Organa in Rogue One. But here’s the thing: You can’t live in nostalgia forever. As we all know, this is where The Force Awakens went wrong. The director tried too hard to make it seem Star Warsy, and ended up with a carbon copy of the Originals, just… bigger.

Nostalgia is fine, in small doses. But at some point, you’ve got to recognize that the past has to make way for the future. The essence of life is change, and without it, nothing can grow or move forward, and a story is condemned to death. If Star Wars is to ever succeed beyond the Skywalker Saga, at some point these new movies have to escape the grip of the Originals and stand on their own two feet.

It’s the same reason that Yoda let Luke think the Jedi texts were destroyed, even though he was well aware Rey had snitched them and they were safely on board the Millenium Falcon. Unlike what Kylo Ren seems to think, the past doesn’t need to be destroyed; only the chain that keeps us—and Luke—attached to it. Only when he stopped clinging to what was and what used to be could he unlock his true potential and shape the future.

Let go of the past. Don’t destroy it.

And that’s what Rian Johnson does. Even as he ushers out the old era of Star Wars, he gives us new characters we can love and root for, a new story we can bite our fingernails over and theorize about, and a new dimension of the Force that’s never been explored before. He doesn’t destroy the past—in fact, he even gives us some beautiful tributes to the previous sagas, like R2-D2 playing the Princess Leia hologram—but he does change the future.

Because the future is the focus now.

What’s done is done. This is a new era of Star Wars, and whether or not we’d like to stay in the old one is irrelevant. As Yoda put it…

We are what they grow beyond. That is the true burden of all masters.

The Last Jedi is a blind leap into unfamiliar territory. Yes, it can be startling—even jarring, at times—and yes, it’s a dangerous new world where bad guys might not always be redeemed, and heroes don’t always win. But it’s also a stunningly thought-provoking entrance into a new period of Star Wars history.

And I, for one, am excited. 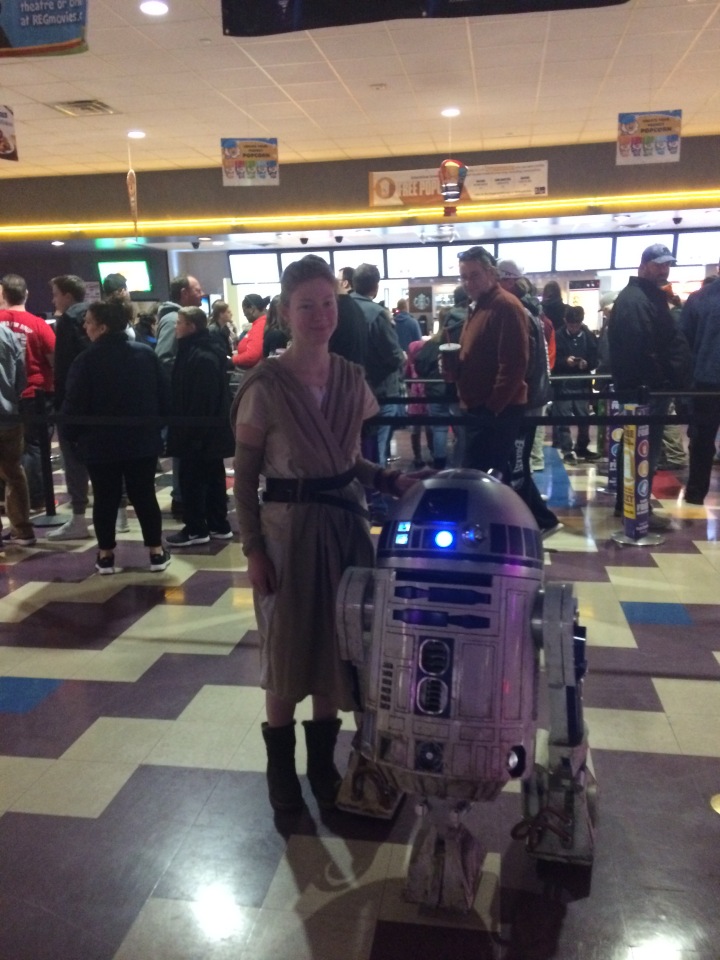 Yes, that’s me dressed as Rey, standing next to a full scale R2-D2 model that moves and beeps. It quite possibly was the greatest moment of my life. A ten-year-old kid dressed as a Jedi even came up to Anna and I and asked, in the most awe-struck tone, if we were Star Wars fans.

No, actually, I totally decked myself out in Jakku garb because I think it’s time for the Jedi to end.

I didn’t say that to him.

His grandfather eventually came over and asked if they could get pictures with me, which I permitted, and I swear, for 2.47 minutes, I felt like a Disney employee.

So, ya seen The Last Jedi yet? (That’s a stupid question. You wouldn’t be reading this if you haven’t.) Tell me your thoughts in the comments, and we can talk. But if you intend to debate me, beware: I have prepared logic, research, data, and charts about this subject.

26 thoughts on “Wisdom from the Utterly Awesome: The Last Jedi”