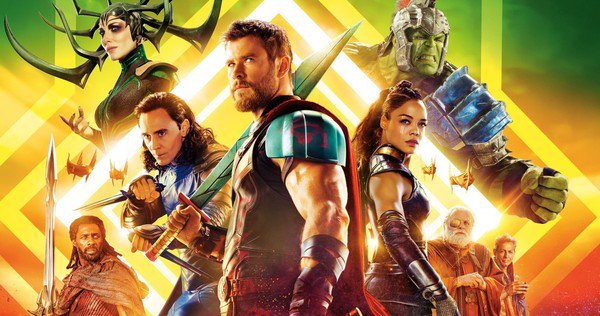 Or, in this case, more stupid and less wisdom, because it was all utterly stupid and therefore, zero wisdom to be had

Hello, people, it’s me again. Yesterday my family went to see Thor: Ragnarok in the theater, and seeing as I’ve once again totally dropped the ball on preparedness for my weekly post, I thought I’d type out a nice little review for no other reason than my own personal need to vent. Which means you get to be the victims of a Sarah Baran spew on story-quality! Lucky you.

BEFORE WE BEGIN, let me assure you that there are NO spoilers, but more Loki gifs than is probably healthy.

I’m not apologizing. For once, they’ll actually apply, and I intend to take full advantage of that.

Anyway, if you haven’t seen the latest installment in the Marvel Cinematic Universe, I do suggest you turn tail and flee for your lives. Because honestly? This isn’t a pleasant review. If you have your heart set on hearing good things about Ragnarok, you ain’t gonna hear them from me. You’ve been warned.

It was kinda horrible

I am aware that this statement will probably earn me hate mail, and more than a few angry mobs with pitchforks and other assorted farming implements trying to burn my house down. Apparently, some people consider this the best, funniest, most brilliant Marvel film yet.

I really don’t want to force my opinions on you. However, that is exactly what I’m about to do, because, you know, “freedom of speech” and “I can do what I want on my blog” and “you don’t have to listen if you don’t want to hear sense” and all that jazz. So here’s the deal: Thor: Ragnarok was only lacking in one area of story development, but that one element was enough to sink the entire ship:

You know how everyone feels complete indifference towards Thor—the hottie with a magic hammer and hair almost as good as Legolas’—while they love Loki with every ounce of their being? The reason behind this is depth. Loki has it; Thor does not. There are no inner conflicts that set Thor apart from all the other nondescript, honorable, hair-blowing-in-the-breeze type heroes, no complexities that snag our attention and gain our sympathy. Loki, on the other hand…

We all knew that something had to be done with dear old Thor, or, come Infinty War, he was going to single-handedly defeat Thanos by boring the poor guy into oblivion. And so, in the attempt to salvage Thor’s image and hopefully recreate it, Taika Waititi, the director of Ragnarok, took an entirely different approach to the god of thunder. Instead of building on the preexisting character, he wiped out anything and everything that could possibly be traced back to the original hero and started over again from scratch.

It all went. Thor’s hammer, his hair, his girlfriend, his father, his beautiful Shakespearean language—sheesh, even Asgard was blown out from under him. In the shambles of a deleted character, an attempt was made to rebuild him from the ground up. Rebuild him as someone new and interesting, someone jaunty and fun, someone that catches the audience’s eye. The director’s secret weapon to achieve this?

I would be a terrible hypocrite if I said I don’t appreciate funny characters. Believe me, the likes of Flynn Rider and Han Solo have made lasting impressions upon my heart. But making humor a character’s entire foundation isn’t enough to make him interesting. You can give any character a few snarky quips and a maniacal grin, throwing in a couple of green capes and golden helmets on the side—but he still wouldn’t be Loki. Loki isn’t defined by his exterior appearance, flashy as it may be. Nope, what really makes Loki a fantastic character is what you don’t see. The struggles and insecurities. The desperate need to be valued and accepted by his father.  The bitterness of feeling like he’d been betrayed. The desire to hold himself accountable to no one. The conflicts of Loki’s heart are what really make him… well… him.

Pouring a nonstop barrage of funny lines and quirky quips out of Thor’s mouth still makes him about as memorable as the boring, brattish oaf we met in the first Thor movie, because despite the fact that his exterior has changed, what’s on the inside is still as nonexistent as it ever was.

And that, my friends, is basically the plight of the entire movie.

Waititi tried to snag his audience by the exterior of his film, by flashiness, sparkles, and humor—which, in my opinion, wasn’t even that hilarious. And in the process, the subtle but absolutely crucial aspects of storytelling—emotion, internal conflict, theme—were completely neglected. He tried to squirm his way out of every difficult aspect of storytelling by cracking a joke instead.

The new side characters, while quirky, weren’t developed enough to have any significant impact upon the viewer. Hela (AKA Galadriel running around in green antlers and the Eyeliner of Death, generating swords faster than Luke Skywalker comes up with things to whine about) was just another typical, power-hungry but pointless villain with no motivation whatsoever, except the irrational desire to see everyone kneel. (She totally stole that one from Loki, by the way, which I resent, and I think he does too.) The Grandmaster was, I’m assuming, meant to be comical, but only ever succeeded in making me feel uncomfortable and seriously creeped out. Valkyrie wasn’t horrible, but she lacked the necessary depth to make her anything more than a cute but forgettable character.

And, finally, what I consider the most heartbreaking of all: The subject of Loki and Thor.

Hammers and hair and Jane Foster aside, the real point of the Thor saga has always rested in the brother-against-brother conflict of Thor and Loki, and the downfall and redemption of the god of mischief. But now, in the last installment of the trilogy, when their struggle should come to a final, crashing head, Thor is too distracted by Bruce Banner and some other newfound friends to even remember he was mad at his brother. Sure, there are a few touching moments between the two, but most of these scenes lacked the emotional impact to be anything more than a pat on the shoulder and a sappy line like, “Ya did good, kid.”

Loki, for his part, has been stripped of any depth he may once have possessed, now simply filling the role of another comic relief sidekick—a character who’s importance to the story is no longer crucial. His problems are reduced from the massive, heartbreaking issues of the previous movies to a flippant joke and an, “oh yeah, my rebellious teenage brother does what he wants” kind of vibe, totally undermining everything that the first two Thor movies had built up—and for me, ruining the character.

Which, frankly, is tragic.

To be quite blunt, the entire atmosphere of the film—from the music to the characters to the unnecessary quantity of swear words—was so unlike any previous Thor film that somewhere at the midpoint, it ceased to be a Thor film at all, instead becoming some cheap Guardians of the Galaxy rip-off, where Thor is Star Lord, Loki is Rocket, and Bruce Banner, I’m assuming, is supposed to be Groot. But even Guardians of the Galaxy, stupid though it is, managed to pull off something that Ragnarok completely fails at: Guardians of the Galaxy has heart.

For me, that killed the entire movie.

And here, my friends, is where the wisdom comes in. Yes, there’s actually a point to this. I’m (for the most part) not just ranting for the sake of a rant. Writers, take heed:

NEVER, UNDER ANY CIRCUMSTANCE, IGNORE INTERNAL CONFLICT, DEPTH, OR EMOTION.

This film clearly demonstrates the necessity of writers not devoting all their time to the external of a story, but spending a good amount of brain power on the subtler aspects of internal storytelling. Because that is the telling point of whether a story is merely flashy, or really, truly memorable.

Moral of Story: Get a better director next time.

I promise, I’ll get over this. Eventually.

So yeah. What do you think? If you’ve seen Ragnarok yet, tell me your thoughts in the comments, and we can have a crazy story discussion. I don’t mind if you contradict me. But be prepared for what will follow if you do.

*cracks knuckles* Have at it.

22 thoughts on “Wisdom from the Utterly Stupid: Thor Ragnarok”