You may have noticed my abnormal silence last Thursday.

I would love to sponge my inconsistency away with a laugh and a snarky quip, but sadly, both my situation and my surroundings render me speechless for anything but garbled slurring and incoherent ramblings about Great Lakes and cardboard boxes.

To cut a long story short — we moved.

For those of you who aren’t aware (shame on you twice), my family has been stuck in the complicated process of moving both ourselves and our home business from Maryland to Michigan, a process that started some time last year but was the result of seven years worth of dreaming. Those dreams and that process and all the blood, sweat, and tears we shed to make it happen finally came to an end last week, resulting in four tired but happy human beings and a blog post that never came.

So, yes — to answer the question you didn’t ask — life has been ever-so-smidgently crazy. Take, for instance, the 10-hour drive up. Normal people hire a moving-van. The Barans, however, think they’re better than normal people and can do everything themselves. 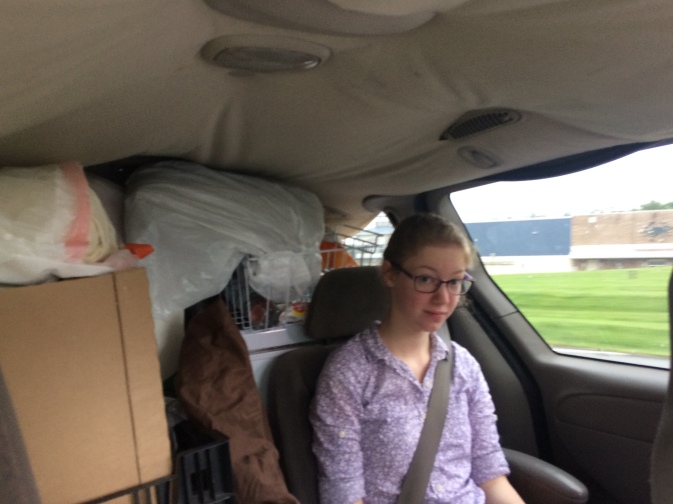 And that, my friends, is how I ended up in the backseat of our minivan alongside a freezer, two tubs of dried beans, various and sundry trashbags stuffed with clothes (they take up less space that a suitcase, you see), a plethora of children’s toys we planned to sell at some point but never got around to it, a sword (mine), a pair of art bags overflowing with things that don’t belong in art bags (like duck tape and plastic skeletons — also mine), and two cat carriers wedged into places that cat carriers most definitely should not be wedged.

One of those cats also threw up an hour into the journey.

For the first time in my life (maybe), I pulled rank as the youngest sibling and made Anna clean it up.

But despite a journey that was fraught with perils (AKA mom being paranoid about the car breaking down and the McDonalds server ruining our sundaes), the house was still standing when we finally arrived, weary and wounded and smelling of cat vomit. 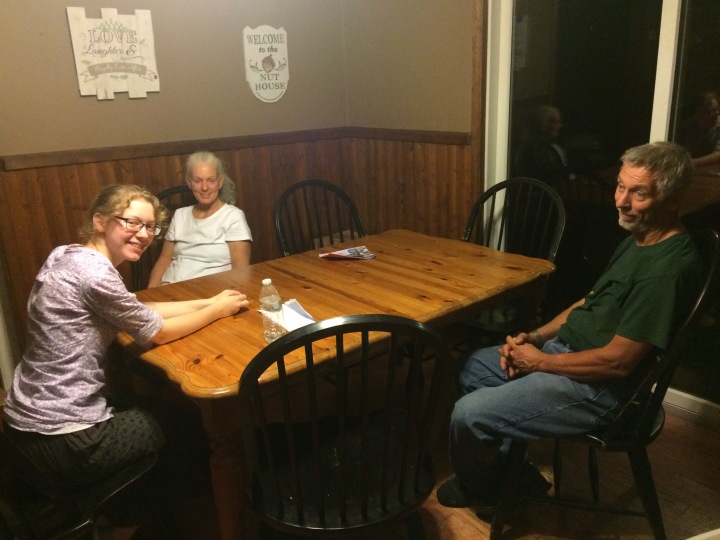 Dad’s face says it all.

Moving is always complicated, but having done it seven or eight times in the last few years, you’d think we would be fairly good at it by now. However, if you think that, you’re in for a sad surprise. For instance: 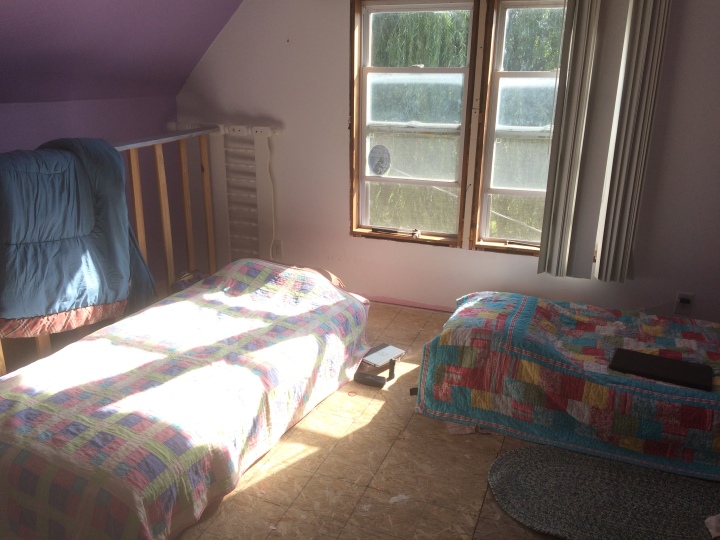 This is Anna’s and my sleeping arrangement. If you’ll kindly direct your eyes to the left side of the picture, you’ll see an empty bed frame laying uselessly on its side.

Right next to a mattress.

I’ve also been stabbed at least eight times by splinters, since we ripped up the carpet but didn’t put anything else down in its place. We’ve been walking around on splintery sub-flooring for a week and a half, yet despite our pain, none of us are intelligent enough to put on some shoes. 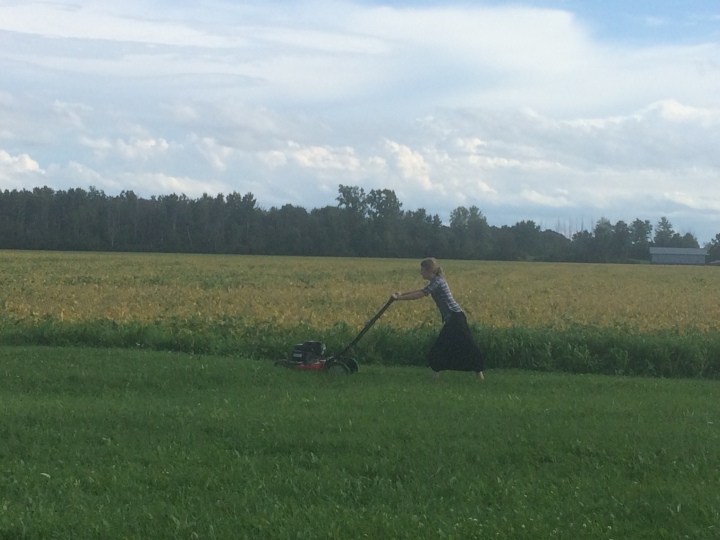 THIS GIRL. This girl mowed two acres with nothing but a push mower.

My sister is the real-life incarnation of Wonder Woman.

*chokes on her drink* It’s… just look… it’s a… we have a…. *is rendered incapable of speech*

And thus is was that Sarah Baran finally found a partner to share her life with.

Shout out to Corissa Maiden of Praise for reminding me that Adventures in Odyssey exist. Our first New-House-Tradition is to sit down every night and listen to two or three episodes. As you can see, Anna and I are generally the only ones who manage to stay awake through the whole thing.

Because we’ve moved so often, most of our household items spent a good chunk of time packed away in storage, while we functioned on the bare necessities. (The other day, I had to use a fork handle in place of a butter-knife for lack of the real thing…) But we’ve finally been able to haul everything out and look upon the treasure trove of memories and assorted wall-hangings that haven’t seen the light of day in what feels like ages. Mom remarked that it was like meeting old friends again 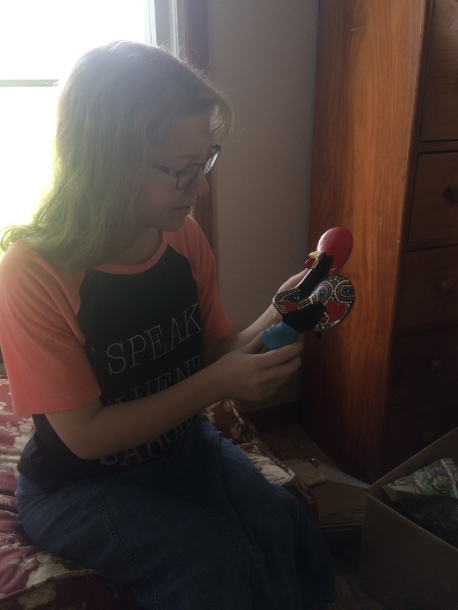 And then… there’s that.

Our second day here was graced with a rainbow, which was a nice reminder to uphold all our joy with gratitude to God, from Whom all blessings flow.

(That was strangely poetic of me.)

Seriously though, I’ve spent the last week wandering glassy-eyed around our house and yard, randomly touching things to make sure they’re real. After seven years of dodging in and out of rentals, basements, and friend’s spare rooms, it’s crazy to think that we’ve finally settled down. And here, of all places.

I’ll be honest: Though life has been a crazed conglomeration of of adventure, chaos, stress, deadlines, and excitement, that wasn’t the entire reason I didn’t post last week. They played a big part in that decision, yes, but when it comes right down to it…

Because how can I even begin to sum up these last few weeks? Written words are too flat, too colorless to capture the depth of emotion, the height of adventure, the fullness of my gratitude to God for giving me a wild bunch to call my family and a storybook to call my life.

But sometimes, life is so good that you don’t want to waste the here-and-now trying to cram it into the narrow parameters of a page. Sometimes, it’s nice to forget about all of that and just be still, sitting with my family, our legs dangling over turquoise water as the lights of Canada wink at us from the opposite shore. Breathing in the twilight breeze. Thinking about our house with the caving-in staircase and the splintery floors, contemplating adventures past and dreaming about the adventures future. 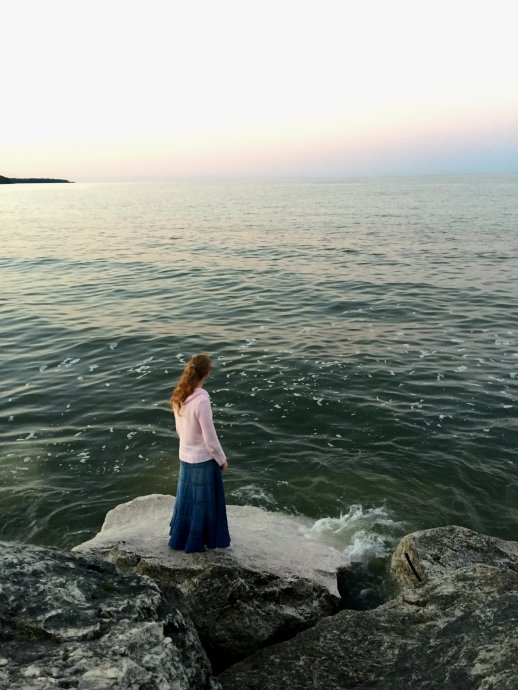 After seven years, God has finally brought an end to our Maryland chapter. Now the story is turned to the Michigan pages.

This ought to be fun to watch.

And for your last dose of amusement… can someone please explain to me what’s going on in this picture? 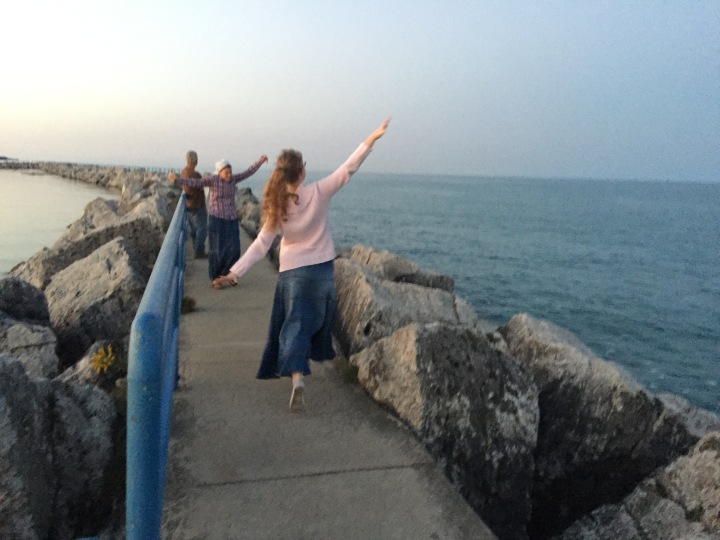 Even I don’t know.

28 thoughts on “Moving, Michigan, and a New Page in the Lifebook”

Oddball sarcasm enthusiast, INTJ, and author/artist combo. Welcome to my haven of cheerful stupidity: a place where wisecracks abound, geekiness is encouraged, and I endeavor to show the world that finding joy in the little things of life will make you happier than a hobbit.

My aesthetic is randomly disappearing for months on end only to pop up again like nothing happened.
This is the part where I say something sappy about how life would be notably more boring without these fiends adding spice to the roiling cauldron of 2021. Let’s do it again sometime.
It’s been a year since this story started as a joke. Since then, it’s taken over my life. SO, in honor of Project Caribou‘s first birthday, meet the main character:
Happy one-year anniversary to the Great Veil Crisis of 2020. To commemorate Anna’s first wedding anniversary, some of us wore our bridesmaid dresses to church and held a graphic reenactment of the only time I’ve ever cried in public.
After unintentionally ghosting everyone for the past three months, I’ve returned to remind the world I have an actual face like an actual human being. Here are three random facts that sum up my current existence.
Commissioned by my church for a ladies’ event. I will never forgive them for making me paint calligraphy.
Happy belated Father’s Day to Sley, the accidental dad-friend of the Aeterna squad, happy anniversary to Aeterna, which I started writing 6 years ago, and happy anniversary to my brother having his appendix removed. May they all live long and prosper. (Except the appendix.)
Random adventures at the Creation Museum, including but not limited to:
Rare photo of an introvert in the wild.