A very professional critic (my sister) told me that my intro for this blog post was awful. That, my dear friends, is sisterly love in a nutshell. But I will grudgingly admit that…hang on. I don’t know if I can say this.

Ahem. You didn’t read that.

But just to be safe, I rewrote the intro. It’s what you’re reading now.

This is going nowhere, fast.

Skip it. Let’s just move on to the story I was trying to tell before she had to get critical.

In a hole in the ground, there lived a Sarah. A Sarah who never went anywhere except to homeschool co-op on Mondays.

Generally speaking, when I am in a public place with numerous people I don’t know, cringe-worthy moments are bound to take place. Fortunately, I only take one class, a drawing class with all of four people in it, which means there isn’t much time for my social ineptness to make itself evident. But it certainly makes the most of that class.

Last Monday, I finished a live model portrait of one of my classmates that I had been working on for several weeks. As I was silently patting myself on the back for not having a mental breakdown over my first attempt at something of that ilk, my art teacher, a very nice homeschool mom, decided to show me the ropes of matting one’s drawing. (Hopefully you know what matting is, but if you don’t, here’s a picture for reference.)

The mat is the strip in between the painting and the frame. This one happens to have a big ugly stain on it in the lower left corner. I’d love to give credit to whoever painted this lovely wave, but I literally have NO IDEA. I just typed into Google “painting mats” and this is what came up. Whoever you are, Unknown Artist, it’s a beautiful painting. Now please don’t sue me.

Anyway, artists apparently need to know how to get the proper dimensions needed for a mat for their artwork, just in case they ever want to frame. So my art teacher undertook the difficult task of explaining something to me that involves math.

That was a mistake.

To help me along, she drew a diagram.

Look closely. Do you see what is wrong with this picture?

I sat there, bewildered and confused and puzzled, as she patiently tried to work me through it. We were on two completely different pages, but neither of us realized it. This makes for a very bewildering situation.

Now to help your imagination along, I’m going to stop right here and explain the room setup to you. We’re in the basement of a church, doing art in a very small Sunday-school room. And there are only four people in the class, but I happened to be sitting directly in the middle of them all, trying to work my way through a word problem that was written wrong. I also happened to be the only one talking. Basically, my dumbness was on full display for everyone.

When finally we figured out that she had written it wrong, I felt a little better about my poor dumb self, but not for long. It’s great when the reason for your dumbness ends up being a faulty math problem. It’s not so great when the problem is fixed, and you still can’t figure it out.

See, I thought that you just subtract nine from eleven, and that’s your answer. So I blurted out, “Three!” with an insanely pleased grin.

Ahem. Eleven minus nine is not three. I know this. Temporary psychological misfire. But I will say, it’s extremely embarrassing when a classmate who’s THREE years younger than you corrects your math. One, it shows that you really are as dumb as you look, and Two, it shows that yes, the entire room is listening to this.

I gave Mrs. Howard a look of hurt and bewilderment. “Yes.”

See, eleven minus nine is two, but look at the diagram again. 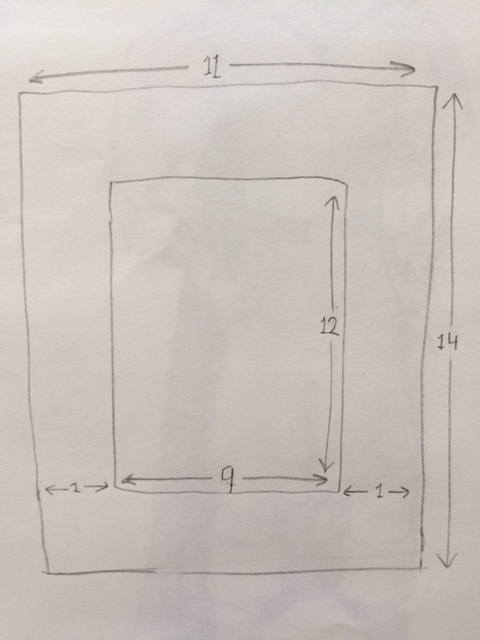 For some reason, this last step of division took a very long time for me to grasp. By the time I did, the entire room was fully convinced I had had some sort of brain trauma when I was younger. I myself was beginning to agree with them.

Then I came home, where the warmth of familial love brushes away all tears of awkwardness or public humiliation.

I told the story to my kind and supportive family, and they LAUGHED at me. The nerve. I was highly offended.

But I thought I’d make the most of it, and promptly typed it out, for your viewing pleasure.

I hope you appreciate the pains I suffer.

And just so we’re clear, I really do know that eleven minus nine is two.

Random adventures at the Creation Museum, including but not limited to:
Rare photo of an introvert in the wild.
I guess it’s time I started talking about my new writing project, so, here goes nothing:
I read Middlemarch and then I binged the BBC drama and now I have strong feelings about oppressed Polish artists and their red coats.
her hair goes swoosh.
just your average forest painting
sir, those are some snazzy boots.
And that’s how all my pens ran out of ink.
a cute lil ghostie I would like to be friends with.